Alzheimer’s disease, according to researchers, does not have a single cause. It is most likely caused by a combination of factors, including genetics, lifestyle, and environment. Scientists have identified risk factors for Alzheimer’s disease. Does Alzheimer’s run in family? 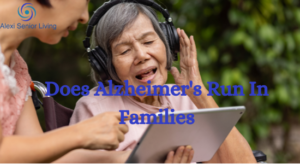 While some risk factors, such as age, family history, and heredity, cannot be changed, new evidence suggests that there may be others that can.

Family history is another significant risk factor. Those who have an Alzheimer’s parent, brother, or sister are more likely to develop the disease. If more than one family member has the illness, the risk rises. When diseases run in families, either heredity (genetics) or environmental factors, or both, may be involved.

What Does Alzheimer’s Disease Do to the Brain?

Aluminum is not the cause. Aluminum was identified as a possible cause of Alzheimer’s disease in the 1960s and 1970s. This suspicion raised concerns about aluminum exposure from everyday sources such as cooking pots, foil, beverage cans, antacids, and antiperspirants. Aluminum has not been found to play a role in the development of Alzheimer’s disease in subsequent studies. Today, almost all scientists are focused on other areas of research, and few experts believe that common sources of aluminum pose a threat. You can look for new memory care facilities near me for your loved ones.

You may be able to influence other risk factors

While age, family history, and heredity are unchangeable risk factors, research is beginning to reveal clues about other risk factors that we may be able to influence through general lifestyle and wellness choices and effective management of other health conditions.

Head injury has been linked to an increased risk of dementia in the future. Buckle your seat belt, wear a helmet when participating in sports, and “fall-proof” your home to protect your brain.

The heart-head connection: Some of the most compelling evidence connects brain health to heart health. This connection makes sense because the brain is fed by one of the body’s most extensive networks of blood vessels, and the heart is in charge of pumping blood through these blood vessels to the brain. Many conditions that damage the heart and blood vessels appear to increase the risk of developing Alzheimer’s or vascular dementia. Heart disease, diabetes, stroke, high blood pressure, and high cholesterol are examples. Monitor your heart health with your doctor and treat any problems that arise.

Donated brain tissue studies add to the evidence for the heart-head connection. These findings suggest that plaques and tangles are more likely to cause Alzheimer’s symptoms in the presence of strokes or damage to the brain’s blood vessels.

Overall healthy aging: According to one promising line of research, strategies for overall healthy aging may help keep the brain healthy and may even lower the risk of developing Alzheimer’s and other dementias. These precautions include eating a healthy diet, staying socially active, avoiding tobacco and excessive alcohol consumption, and exercising both the body and the mind.

Can Alzheimer’s Disease Be Prevented?

Latinos and African-Americans are particularly vulnerable. According to research, older Latinos are about one-and-a-half times more likely than older whites to have Alzheimer’s and other dementias, while older African-Americans are about twice as likely as older whites. The cause of these disparities is unknown, but researchers believe that higher rates of vascular disease in these groups may put them at a higher risk of developing Alzheimer’s.

Alexi Senior Living offers the best services for Alzheimer’s patients. For more information call (815) 534-5389 or you can read about how sundowning starting.